Lake Wales Repeater Association History
The truth according to Sam Baine W4KUM, who became a Silent Key in September 2021.

Of course it takes many things time, money, equipment, people, and etc. to get one started and the following is a list of those as of record who had it not been for them, L.W.R.A as we know it today, would not be!

March of Dimes Walk..5th year ..10 Volunteers provided communications and Safety
No Meetings during the summer…..

Tour of Sebring 500 signed up….150 thru Lake Wales …12 volunteers
Letter of Thanks from Sebring Club and from West Palm Beach Org.

New Repeater on air..old one to be repaired

June, First club Field Day event. Had a cook out too. This was a big hit with members.

July 16, Repeater back on the Air after June lightning strike.

February 4, Members participate in the “Freeze Your Buns Off” CW QRP contest.

July 30, Members participate in the Flight of the Bumble Bees CW QRP contest.

March 1, City of Lake Wales provides new home for our repeater on a water tower.

April 2, LWRA repeater back on the air thanks to City of Lake Wales, using water tower.

July 14, Voterd for Temporary Location of the UHF Repeater to be at a members house.

August, Put up the UHF Repeater at Rich’s house (KJ4INW).

May 20, Volunteers for Communications Net for the Iron Man half Triathalon in Haines City.

June 23, Summer Field Day Pic-Nic at Kiwanis Park and the rain held off for a great day of fellowship.

From the Oldest Amateur Radio Club in Polk County. 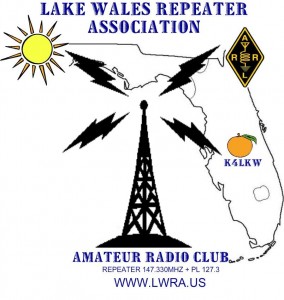